​About 14,000 years ago, a dam of ice south of what is now Wisconsin Dells gave way and glacial Lake Wisconsin drained. In a matter of weeks, water poured down the bed of the Wisconsin River, cutting and shaping the gorges and rock formations of the Dells. In Adams County water levels dropped one hundred feet or more and the flat, sandy lakebed began to dry out. Streams formed, most of them running from the still melting glacier on the east of the county to the river on the west. Extensive wetlands remained throughout the county, especially in the future towns of Colburn and Leola, but also in Adams, Easton and Quincy. Soil began to form, plants to grow, wildlife to appear.

Goc, Michael J.  From past to present : the history of Adams County

Menominee and Ho-Chunk here before and during settlement

Settlement and growth of early New Haven and Big Spring

(Goc, Michael J.  From past to present : the history of Adams County)
​
1832 * Daniel Whitney and Amable Grignon are both authorized by the Menominee Indians to build sawmills on the left bank of the Wisconsin across from what will become Nekoosa. * Whitney builds his mill and, to supply it with equipment and supplies hauled by oxcart, blazes the "Pinery Road" north from Portage through Adams County.

1837  Men from the Wisconsin Ho-Chunk tribe visiting Washington D. C. are coerced into signing a treaty by which they give up all their remaining land in Wisconsin.

1838  Jared Walsworth marries a Menominee woman and is allowed to settle near the Indian village located about two miles east of Lake Mason.   Robert Allen builds a cabin on Blackhawk Island, at the head of the Wisconsin Dells.

1840  Federal troops arrive at Portage to gather the Ho Chunk people and remove them to reservations in Iowa.

1845  The Ward family settles on Indian land in what is not yet the Town of New Haven.

1847  The Menominee Indians sign a treaty relinquishing their rights to land in east central Wisconsin, including Adams County.

1849  Settlers in the Briggsville area, who are "squatting" on unsurveyed land not yet for sale, organize a "Claim Protection Society."

1850  Alexander Briggs and Amphilius Chamberlain dam Neenah Creek and create Lake Mason to supply water power for their mill.  Federal surveyors complete the survey of all but three towns in northeast Adams County, finally opening the land to legal purchase and settlement.

1853  John Baptiste Du Bay establishes a stage coach line to carry mail and passengers from Portage to Stevens Point with stops at Big Spring, the Marsh House and Coloma Corners.

1860  Adams County Board adjusts the borders of the Towns of Adams, Easton, New Haven, Preston and Strongs Prairie.

1861  The Civil War begins. County supervisors vote to pay the families of volunteers $2 a month for every child under age 12 as long as the man remains in service.

1862  Violence between Sioux Indians and settlers at New Ulm, Minnesota prompts an "Indian Scare" in Wiscon- sin: White Creek settlers board their windows and stay home at night and farmers at Big Spring organize a "military company" which drills at the village.

1874 * The federal government makes its final, futile attempt to remove the Ho- Chunk people from Wisconsin.  *In New Haven, Congregationalists and Free Will Baptists join to build a church building on John Stowell's property in Big Spring.

1885  Cyclones strike in Rome and at Big Spring where big winds move the Methodist Church ten inches off its foundation.

1908  Railroad Talk: if county taxpayers put up $75,000 in bonds, the Western Transportation Company will build a railroad from Portage to Briggsville, Big Springs, Easton, Friendship and Wisconsin Rapids.

1911  A meteorite, weighing 1.75 pounds, crashes through the roof of the William Gaffney barn in New Haven: scientists buy what is known as "the Kilbourn Meteorite" and distribute pieces to museums throughout the United States.

1918  Due to the Spanish flu epidemic the Adams Village Board of Health orders all "schools, churches, Sunday schools, theaters, moving picture houses, saloons, billiard halls, other places of amusement and all public gatherings closed for an indefinite period of time."

1922  Sheriff Hoard finds a 'still in operation on the Cusack farm in New Haven.

1940  New Haven tavernkeeper and two women are arrested for keeping "a house of ill- fame." 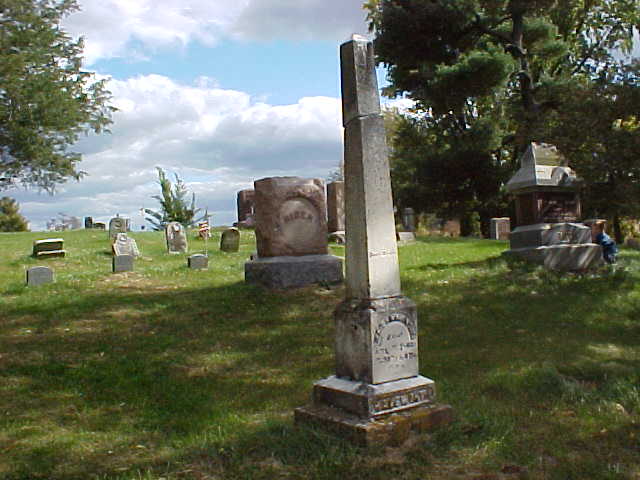 Born in Big Spring, Adams County, Wisconsin, Best moved with his family to Dunn County, Wisconsin. Best owned the Meadow Side Stock Farm near Downing, Wisconsin, in the town of Tiffany and raised cattle and hogs. He also taught school. Best served as Tiffany town clerk and Tiffany town chairman. He also served on the Dunn County Board of Supervisors and as secretary on the school board. Best served in the Wisconsin State Assembly and was a Republican.

Landt was born in the town of Aztalan, Jefferson County, Wisconsin Territory. He moved with his parents to Big Spring, Wisconsin. Eventually he settled in the village of Friendship, in Adams County, Wisconsin. He served in the 10th Wisconsin Volunteer Infantry Regiment during the American Civil War. He was a farmer and teacher. Landt served as the Adams County Treasurer from 1887 to 1893 and was a Republican.  In 1889, Governor William D. Hoard of Wisconsin appointed Landt a delegate to the Farmer's National Congress in Birmingham, Alabama.  He served in the Wisconsin State Assembly in 1895 and 1896.  In 1911, Landt moved to Herman, Minnesota and managed a creamery with his son Homer. He died in Herman, Minnesota.[1][2][3] Landt's autobiography was published based on the diary he had kept: Your Country Calls."

Winter was an owner of citrus properties in CA.   She prided herself on having been the first woman in Wisconsin to operate a typewriter when serving as secretary to a lumber concern at Tomah, Wisconsin.